866 Numbers — More popular than ever

The 866 area code was released to the public in 2000 with much anticipation from the phone companies providing toll free service, one report stating: “the floodgates to the new toll free code 866 will open.”

Once the gates were open, phone companies found themselves baffled as to why they weren’t flooded.

So the rush was on to blend the terms “866” and “toll-free”. CNN reported on it, NBC, ABC, AM, FM radio; they all reported on it. The internet was bombarded with telephone company websites talking about the new 866 area code, it was madness; yet still, businesses were reluctant to buy an 866 area code over an 800. 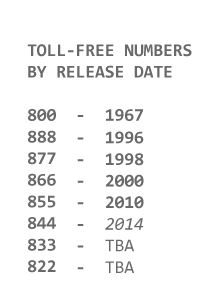 It took six years but it looks like the 866 area code finally became more recognized as toll-free. So much so that it has recently surpassed the 877 area code in popularity.

More businesses are using the 866 toll-free area code now a days because more consumers know that it is toll-free.

Businesses also benefit with an 866 number since they are brand new, it’s unlikely that they’ll receive any wrong number calls from people looking for the company who used to use that number as in the case with many 1-800 numbers.

The newness of the 866 also makes it very easy to get a customized number. Many people get phone numbers with their name in it or a word describing what they do; when they advertise their number the ads often read: Toll-free 1(866)PH-Number.

That was the key element to the rise in popularity of the 866… Since they are usually advertised with “toll-free” preceding the phone number, the American consumer began to associate the terms 866 & toll-free then … viola like an American pop star, 866 is on the rise to being the #1 most requested.

Of course it helps that 1-800 phone numbers are practically impossible for small businesses to get their hands on. Most phone companies do not field requests for specific phone numbers or area codes; they’ll just give you what they have.

Other companies ONLY have 866 area codes. Some companies outsource to specialists that specifically assist small businesses in obtaining 800 area codes and other customized requests.

Tollfreenumber.org is one company that has made it it’s mission to provide small businesses with toll free service.

“Pretty remarkable” said one customer as they were leaving the store; “they dedicated so much time to talk with me that they understood what number would work best for me better than I understood it myself!” he concluded by saying “I am very pleased with the number I got, it’s easy to remember, it’s fun, and I had a great time through the whole process.”

The information provided on this page may be freely reproduced as long as this footer tag remains intact and credit is given to Tollfreenumber.ORG as the author and a link is placed to tollfreenumber.org. Please do not violate copyright laws by stealing this, or any other works on the Internet.