You are here:  Home » Uncategorized » How Do People Know 844 is Toll Free?

Posted by Tollfreenumber.ORG  at February 4th, 2014 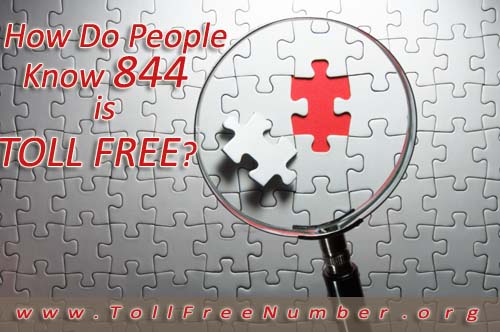 With the continued popularity of toll free numbers one may ask themselves, “Where do new toll free numbers come from?” Toll free numbers are governed by the FCC and established for you via responsible organizations such as us here at www.TollFreeNumber.org. The 800 area code, sometimes mistakenly called a “prefix”, was the first area code to be released as a toll free number. Many, many years later as more people needed toll free numbers for different uses, the 888 area code was generated. Shortly thereafter, 877, 866, 855, and now recently, 844 was also generated due to the increasing demand of consumers in need.

Something interesting has happened with 844 numbers that never happened with either 877, 866, or 855s – its popularity skyrocketed FAST! Within one week of being released the most popular word/digit combos were swiftly taken and within one month of release, major advertising campaigns were already under way making 844 the most popular toll free area code to be released since the 888! While many new area codes will take a year or more to become viewed as ‘popular’, the 844 started popping up on billboards, trucks, radio ads, etc. So, what is so good about this new area code and why do people love it so much?

The answer is as simple as it is complicated: Number preference.

The numbers 8 and 4 are popular numbers. They’re even digits, 8 can be easily divided by 4, and they give a certain appeal when people see them. 1-844 can be marketed easily because of how it looks and, as all marketing corporations know, looks count! Because of the immediate appeal of the 844 numbers, companies have already branded and put them out there so there’s no question as to whether they’re recognized as ‘toll free’. We often get asked, “But, it’s new so… How will people know it’s a free call?” The answer is that it’s the same reason 800 and 888 are known as toll free numbers: Because businesses advertize them as such! They’re in such high usage that when all of us repeatedly see the advertisements, “Call us Toll Free at 1-844…” it gets seared in our brains. In fact, 99% of people we talk to say to us, “Well, I know 844 is toll free number but I’m not sure if other people will.” Trust us, not only will they know it’s toll free, they’ll be more likely to call you on your new 844 number because of its massive appeal!